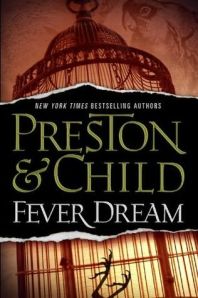 Before I’d read any book by the Douglas Preston and Lincoln Child writing team, I’d seen the film “The Relic”. It was pretty good, if a bit fantastical for a prehistoric type creature to stampede a museum in that way. I didn’t think anything else about, nor did I buy the DVD or try to see it again after the first time, though incidentally I might watch portions of it if it popped up on television.

But reading the novel version of a book has always been a pattern of mine, a strong pattern to learn more than what a director can often add and portray on the “big screen” despite their best efforts, since I’d read “The Abyss” after watching the film. I loved the film, but the book gave it so much more range. We learned implicitly how the aliens viewed humans, and why one human’s thoughts as they died when the submarine they were in was lost, kept the aliens from destorying all of humanity.

This one yeoman, though alarms sounded, the impacts of a chance hit caused fractures in the hull, and impending doom crept closer second by second…he didn’t see or hear all that was going on around him, not really. He imagined so intensely a certain vision: of himself in his mother’s backyard, the smell of a barbeque grill roasting savory meat, the happy cries of his children as they tumbled back and forth at play. He imagined it so strongly that he was no longer really on that submarine, and he never really died at all. His ability to project in this way saved the human race in the end, though it was never acknowledged or known in the film. We also had a sad, maddening background on why the character played by Michael Biehn came to be what he was.

Novelizations are not always so good, often designed and written only to put in written form for audiences what was shown onscreen. One film I really loved which had an awful novelization even though it was by a writer I generally like and has written dozens of great sci-fi books, was “The Chronicles of Riddick” by Alan Dean Foster. It was flat, boring and brought no quiet charisma as Vin Diesel had to the role.

When I saw the book version of “The Relic” I took a chance, and gave a “warum nicht”, why not? It began a powerful love affair I shall never regret even if the latest installment did not carry the OMFG! twists, surprises and depth the earlier books had.

Like many I have a crush on Special Agent Pendergast, who is the heart character of the series, and as easily as he would disregard me in the novels were I “inside” them, that cool, cultured persona would still keep my undying devotion. Even if his writers have now almost turned him into a cliché. The exact same descriptions are given about him, and instead of thrilling us with a recurrent phrase we love, I felt like saying, “I know all that! Give me a new facet to his character!” And they tried, they really did.

With making the central plot a mystery which reveals his wife had been murdered instead of tragically killed in a hunting accident, and his subsequent investigation as to why and how, one would have thought the new emotions he displayed, a tendency towards lack of control, we might have been satisfied. “We”, and I use the term loosely, the ones who’ve written and spoken up in review of “Fever Dream” though some have taken it a bit too seriously I think.

I liked it overall. I gave it three solid stars, and can both understand why some still gave it 5 out of 5, and some others two, but not the many 1’s. Sure, some of it has become cliché, but the style is still clean, it’s still precise. It didn’t have the unguessed revelations as the other books, but it served it’s purpose, which obviously seems an “interim” book of sorts before they delve more deeply into the new characters presented who are versus Aloysius.

Yes, it was predictable in a way. Those who’ve read the previous novels where you honestly had no idea what was going to happen would of course be disappointed because they gave clear clues all along who would ultimately be the “bad guy”. You have Lt. D’Agosta, as sturdy and laconic as before, and his (I apologize but I knew these kind back in the department and it applies) bitch of a police captain girlfriend.

Some people complained that too often the duo made political statements in their phrases and descriptions. Want to bet these ones, and I have an idea clearly of who and what they might be, would not have said so before Obama was elected president in the USA. I actually laughed when I first read one, because I’d seen the complaints in reviews. It was actually quite a mild statement which was obviously a comment made as if from a protesting replier to racist articles on the internet. I was surprised there would be so many vehemently complaining about it, but it is true that previously the team had not made any such statements about current issues though they had about some situation in the past, like the orphan and immigrant population of early New York for example, but no one complained about those. The reviewers who had a problem showed themselves as historically not well read.

Later in the book, in a scene which stereotyped white, redneck yokels in the South as all being the same, some complained at their use of racially and ignorant descriptions. Again, were there not so many quick to try to be politically correct in all things and not understanding creative license, this would have been overlooked. It would have been overlooked or seen as normal if Preston and Child had done such before, and they had not, so it was an issue.

All very petty things to me. The book, overall, was good. Any other writer or team might be proud of it, but with the fan base, the fan base which believes they are so educated, conscientious and well-rounded, they were insulted and disappointed in this offering. Hell, they even complained about chapters being too short, and that lesser plots lines were introduced and distracted them from the main..?! They are simply demanding too much I feel.

I’ve complained myself about writers who seem to have yielded to the pressures of publishers, and the public who demand an installation every so many months so that they produce more and more tepid works, less introspective and deep, but I don’t feel that completely about Preston and Child. This might have been a 3 compared to the 4 or 5’s they’ve written before, but it was solid. It was enjoyable. It was infinitely above a number of other books out there on the market the same ones would exclaim over. Whether its Robin Cook, Pat Conroy or Nicholas Sparks (all of whom I’ve never personally read or will) there comes a downswing, a counter swing before the pendulum rises again.

Referencing those I do read, C.J. Cherryh or Lynn Flewelling, and even J.R.R. Tolkien, it’s the same. Some books are less than others, have less impact on individuals. It doesn’t mean the writer or writers have “lost it”. Keep hope alive. Research the creative process. Try not to be so critical, especially if you don’t write yourself, not in this capacity.

I rated Flewelling’s last novel “The White Road” a D, comparable to a 2 out of 5 for me in an earlier blog entry (against her past works), but I hope very much for the next book she will return to former glory. I believe in these writer’s abilities and the love of their characters. If one is a true fan, I think you should too. That doesn’t mean to be absent of criticism. It entails being cognizant of change, and having the ability to be objective.