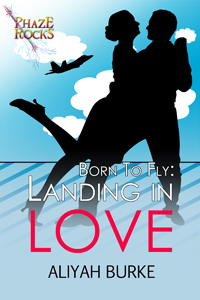 Review: I found myself drawn into “Born to Fly: Landing in Love” from the very first paragraph. The dialogue was snappy, the images vivid and the characters sensationally piqued my interest. Bliss and Erich, I knew, were the pair destined to be together somehow, someway—although it took some time for me to begin to like Erich. He was sexy, attractive and infuriating but in a way I could never entirely dismiss.

Although some expressions or phrases didn’t make sense to me, in particular the overuse of some words and descriptions and a few jumps in scene without enough explanation to keep one from slight confusion, they never seriously detracted for the mood and flow of the story as a whole because I was always compelled forward, curious to know what would happen in the end.

Book Description: “Air Force pilot, Major Erich “Daredevil” Stark runs into a woman leaving a club and is immediately attracted to her. He wants to know her better but after a brief and intense interaction she slips away. When they meet again, he longs to start over.

Bliss Esparza has spent her life doing two things. Dancing and raising her younger brother, When she meets the handsome pilot she knows he¦s something special.

Erich knows she’s the one for him. But one night he finds himself tossed out of her villa after offering to help her brother with a recommendation letter for military school. Will he be able to convince her to give them another chance?”

Disclaimer: THIS REVIEW WAS COMPLETED FOR EBOOK ADDICTS REVIEWS, AND ORIGINALLY POSTED ON OCTOBER 11, 2010. PLEASE VIEW THEIR WEBSITE TO SEE ALL REVIEWS AVAILABLE.