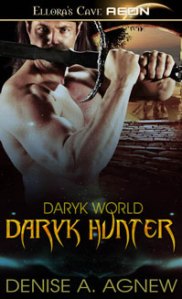 Review: Initially, I found it difficult to get into “Daryk Hunter”. The primary plot was clear: Ketera needed to save her father, despite being shipwrecked and summarily “acquired” by Dane Charger, the Daryk One—in addition to various adventures, further captures, deliverances and escapes along the way. But I was left with the feeling of seeing random scenes in a very fast-moving film without being provided enough background information to care about those involved or if they would ever accomplished their goals. Romance was sadly lacking in this tale although sexual terms and graphic sex scenes were prolific.

If you’re looking for a quick read to breeze through as if on dragon’s wings, with a good deal of sex along the way, spend a few hours reading “Daryk Hunter” by Denise A. Agnew.

Book Description: “When Magonian archaeologist Ketera Aldrancos’ father is imprisoned, she’s determined to save him. Before she can do so, her ship is wrecked. Water laps at her, a man’s strong arms surround her. His husky voice soothes her. Then she realizes she’s on a foreign beach in the arms of a dreaded Dragonian. A man who looks nothing like the men she’s known. His closeness, his touch sends waves of need through Ketera’s core and shame runs through her. After all, passions are sinful.

Dane Charger, a Dragonian Daryk One, cradles the woman in his arms. He aches to introduce her to the headiest lovemaking imaginable. But his eyes flame red and a growl vibrates his throat when he realizes he’ll need to protect her from marauding slave traders led by a vicious rogue—who just happens to also be his half brother.

Two people whose supercontinents are separated by ocean and two thousand years of prejudice and fear. Two people who may be the secret to saving a race from extinction.”

Disclaimer: THIS REVIEW WAS COMPLETED FOR EBOOK ADDICTS REVIEWS, AND ORIGINALLY POSTED ON OCTOBER 11, 2010. PLEASE VIEW THEIR WEBSITE TO SEE ALL REVIEWS AVAILABLE.