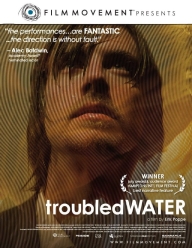 On a flight from New York to Helsinki, Finland, the people sitting close enough to see, and even possibly the staff, might have thought I was having a personal “episode” of some kind, because while watching this film, I not only teared up but I actually cried some minutes during one of the crucial scenes.

I’ve had dreams about my son being kidnapped before, scarily vivid and heart pounding, as I knew I couldn’t reach and rescue him in time before he was whisked away in a dark car by the perpetrators. The helpless, the scream of loss, the terrible realization someone else has your child for whatever reason, at their total control. Rather than deal with the crime itself, DeUsynlige expounds upon the emotions and long-reaching effects the event has not only on the relatives of the victim, but on the murderer as well.

As you can read in the description, its a fairly straightforward premise, and from the details anyone might imagine some of the emotions that might be presented: guilt, rage, grief and love, but the acting is so superb, the direction so subtle yet powerful, the score brilliant, that the sum total makes for an unforgettable, moving film.

Some have complained of it being disjointed, as it is not necessarily presented in sequential order, yet I found the style to be particularly effective for the storyline as any event, especially a crime, can be remembered in different ways depending on your perspective. Certainly the recently released and willing to talk parolee had more knowledge of the actual events than was ever presented in the courtroom. Having lived with the rage, grief and guilt for many years, the grieving parents have filled in pieces of the puzzle to help assuage their own agony, and to try to make some sense of a senseless crime.

We are first introduced to the young man Jan, a teen murderer now a free man in his late twenties or early thirties. After showing a brief vignette of the crime, we see that even then he was an individual too receptive to suggestion and cajoled into serious deeds. Now as a grown man he is ultimately likeable, even gentle and very much sorry for his part in the young child’s death. He’s given release having served his time, and obtains a position as an organ player, the instrument he’s learned to play beautifully. Through his eyes we experience the simple joy of having his own apartment, riding his bicycle along the street, or the shy pleasure of the caring young minister and mother of a small boy, becoming interested in him. Then a problem presents itself, inexplicable events happen, someone gives warnings about him yet how could they know his closed past?

Tormented through the years, second guessing herself, the young mother whose child was kidnapped and killed is now middle-aged with two adopted daughters whom she loves dearly; has a protective, adoring husband, and fulfilling job, yet of course she cannot forget the loss of her son. When she sees a man she believes to be the murderer, her life and emotions are thrown into a swirl of troubled waters, just like the waters her son was drowned in, the place where the parolee’s mind also frequently drifts.

The mysterious events are eventually explained as the two have crossed paths a number of times, all unknown to Jan, for the mother seeks to protect the minister’s son from the fate she’s convinced Jan intends for him. The climax is breathtaking and it’s made known that these two are forever linked to each other by the former crime, and they cannot in any way be made whole until they face the memories together.

In Norwegian with English subtitles, don’t let the need to read them put you off this film. It will flow, for the actors abilities transcend the language differences. You’ll see what I mean. Trine Dyrholm, who played the grieving mother was magnificent. Winner of four awards, with five other nominations, available for sale at all the usual outlets, but also  on US Netflix.

Description: “Jan, recently released from prison after serving time for the murder of a child, has always maintained his innocence and is ready to put the past behind him. A gifted organist, he takes a job at an Oslo church under his middle name, Thomas. His talent and gentle manner quickly earn him the respect of his superiors, as well as the love of the pastor, Anna. Thomas even overcomes his initial panic to return the affection of Anna’s young son, Jens. But his past catches up with him when Agnes, a local teacher, comes to the church on a school visit and recognizes the organist as Jan, the young man who was convicted for the murder of her son.”