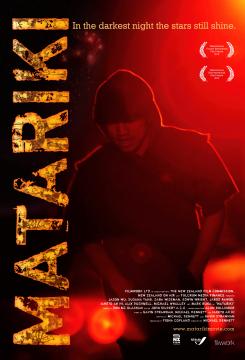 Tagline: “In the darkest night the stars still shine.”

At times a little disjointed, “Matariki” is the story of how lives can coincide just through one senseless act then overlap and metamorphosize into a new network of connections.

Everyone has their struggles, their strengths and weaknesses in this “slice of life” drama, and we see a common thread of wanting and needing love, of belonging, of being accepted for who and what they are. Sometimes it works out, at other times it doesn’t, but more often they just don’t really know what to do and things just happen. They keep trying, however.

Each of the actors believably portrayed their characters: a gay couple wanting to be accepted by their families, a young couple with a baby imminently due that neither wanted in the first place, a mentally challenged man whose dog is his greatest friend, and a couple of teenagers just wanting to get away from the rules and misunderstanding with their parents. The central focus is the act of violence that has left a Maori former sport star in serious condition. Never having felt accepted by his family, his Anglo wife remains at his bedside faced with a heartbreaking decision that she feels she should not make alone.

While not the most in-depth storyline, the simplicity of the direction, the pacing and subtle points of motive revelations are satisfying, and the climax very emotional. “Matakiri” doesn’t try to be too much or full of itself. No over or underacting, and a few really poignant moments with standout scenes by Iaheto Ah Hi as “Tyrone”.

I gave it a 7 out of 10, and its one I would also rewatch, which not always the case even with films I like. I think the film poster could have been better, as its rather misleading and definitely darker than this serious themed but also airy “slice of life” story.

Matariki may not be the brightest star in the sky BUT:

These simple points are what any culture would want for itself but which has been denied for most indigenous since the inception of filmmaking, resulting in decade after decade of misrepresentation, stereotypes, caricatures and appropriation that has been and is harmful to the indigenous and misinformative to non-natives. Thus, Matariki is a triumph and important to add to any indigenous movie collection.