Look at some of the photos of the sport events, glanzbilder.org has some of the best. There is also public group pool where anyone can post their best: Flickr Gay Games 2010 Photo Group Pool.

These are photos from Gay Games 2010, which is winding down to a satisfying if bittersweet Closing Ceremonies which will take place on Saturday, 7 August. 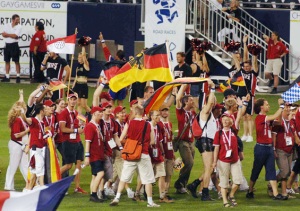 The motto of this year’s event was “Be a Part of it!” And everyone, EVERYONE was encouraged to participate either as an athlete, volunteer, supporter or watcher.

I could write about many topics having to do with gay life, gay rights, political arguments along the spectrum, but my sole focus here is the photos. Look at them. Look at as many as possible.

The determination, the love, the freedom, the joy, the emotion, the pain, the triumphant, and yes the pride, the complete ordinariness of some, the unique flash of others, and more!

So many people have an idea of what “gay” people look like, how they speak or act, how they dress, how they live. And honestly, some of those views are very much flawed. Some are downright ignorant. Some insist on remaining ignorant, biased, and prejudiced, and WRONG.

Of course, with anything like this, there is going to be the mockery of those idiots who make fun of a team if they decide to wear pink jerseys, and make jokes of screaming queens running in heels, tiaras and flashy scarves. They are derogatory, insulting and dismissive. Yet world records were set at this event!

There are those who like to think they are making a viable point by saying, “Why should they have to have separate games for themselves? Why can’t the athletes who qualify for “regular” competitions not just keep their sexuality to themselves and go out and play their sport? This is discriminatory to others. It’s just like having a “Latino Games” or “Creole Games”, where only certain groups are allowed to participate!

When you have a GLBT person turn around and say, “You’ve (meaning heteros) have had your special events all along, now we get to have something for us!” Is no better in my books. It’s the same pointlessness to me, although I can agree with the emotions behind such a response, because we have been discriminated against, abused, embarrassed or humiliated if/when our personal preferences regarding choice of partner was discovered.

EVERYONE, gay or straight or anything in between, handicapped or not, was welcome to compete. From the main website Gay Games Cologne 2010:

IT WAS AN OPEN INVITATION: “…regardless whether you are heterosexual or homosexual, male, female, transgender or transsexual, and regardless of religion, nationality, ethnic heritage, political convictions, athletic skills, physical capabilities, age or physical condition.”

When you look at the photos, you see persons who tried or were trying their best, enjoying themselves certainly, but still fiery in their spirit of competition. Sure there were some who, in looking at a photo, might say, “Yeah, they’re gay alright!”, but many were just men, women, individuals competing. It made no difference. There was no “certain” look that advertised their sexual preference.

I believe it spoke volumes without words to stop judging people on their appearance and trying to push into their private lives. It encourages tolerance that even when you saw two men kissing or lesbian lovers embracing that that is exactly the same as seeing a man and woman. The emotions are the same. There IS no difference, ONLY the ones people create in their minds.

So this event was titled “Gay Games” and for a very important reason in respect of the person who founded and began it (look it up by the way at the main site, it’s beautiful), but it is HUMANITY’S Games in my mind. Humanity who is determined to be tolerant, unbiased, supportive of positive actions in others no matter their sexuality, religion, background, nationality, or any other thing.

Look at those beautiful, valiant faces. I do not in any way understand how some “people” hate, discriminate, try to use religion to justify their prejudices and biases, when quoting one of the statements given in the opening ceremonies, “Religion is no excuse for murder. It is no excuse for discrimination.”