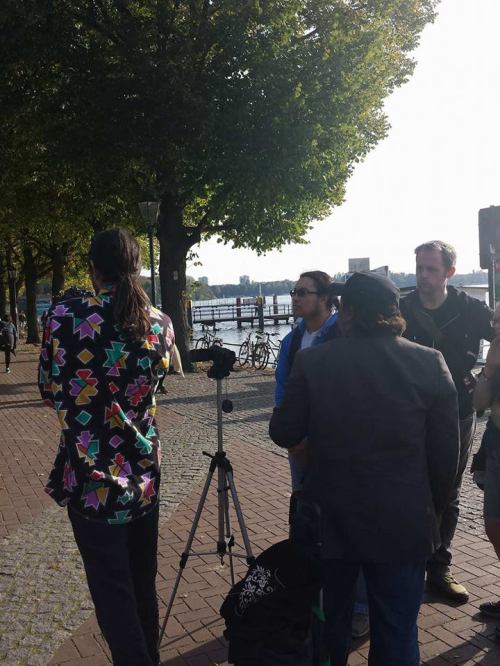 The stories of indigenous peoples and other people of color have been misrepresented and usurped by white people since the invention of moving pictures. Yet no one is better equipped to tell their own stories than the peoples themselves. In my opinion, it is one of the most egregiously “passive” yet harmful ways indigenous peoples are hurt on a daily basis: misrepresentation. #RepresentationMatters.

For a documentary on Native stereotypes in Germany, (link) “Forget Winnetou! Loving in the Wrong Way” (2018) however, it is not unreasonable to suppose that German perspective and experiences would naturally need to be involved in some way. So, despite its weird beginning (a close German friend wrote saying this younger white German academic was interested in collaborating on a film on native stereotypes, but he wanted to use her as a medium until he was sure I was interested), I eventually accepted an offer.

3 years later, the fine cut versions of the film are (link) uploaded for viewing by various festivals and interested groups/institutions on Vimeo, but it has been an exhausting experience primarily because of unnecessary, harmful behaviors that not only affected me but some of the Native participants of the documentary. Please don’t mistake this post. It’s not a roast. I learned some hard lessons that were necessary, on my choice making too. I will not make the same mistake again by choosing to work with someone who seemed to control, but then fully displayed many of the same colonial behaviors and practices the documentary was being created to highlight and help correct. Situations like that do not have to happen. Collaboration doesn’t have to go down like that, as I’ve successfully worked with and continue to work on projects with people from all kinds of backgrounds.

Comparatively, I am an advanced novice to film-making. I’d done several short works before, but this was my first feature-length film. I am no journeyman in hard work, yet it is an emotionally draining profession, especially topics like these where you are not only listening to but experiencing racism, discrimination and the effects of privilege/white supremacist ideology yourself every day. Also, during most of the last 3 years of development, production and post-production, I’ve been a full-time master’s student, in addition to working the equivalent of a full-time job, sometimes as much as 50+ hours per week including freelance positions to make ends meet. All while being a single parent of a special needs young adult with several medical issues.

At the best of times, my life is a study in survival techniques, psychological, emotional and physical, spiritual, but I am not alone. This could be said for many POC anywhere in western societies, but especially those who work abroad in Europe. It’s terribly tough but can be, as in my case, critically necessary. You really do not need or want any superfluous BS, in particular from privileged people who show by their actions, they do not “get it”. Lack of empathy, and not just because they “don’t know”. Some may be considered educated or even work in various movements, groups or positions where anti-racism is their focus, but as one of the film’s Native interviewees rightly said, “They do their activism in a way that only benefits themselves.”

What probably most of you don’t know too, is that in 2016 after putting in a year of work on the film, in addition to my other responsibilities, when the crowdfunding campaign failed (April 2017), the former co-director decided they only wanted to work on certain things in their spare time or either quit all together. This meant to continue at all, I would have to do virtually everything myself for the film to go forward, and in having to do everything, the amount of time and energy this needed would increase and hugely impact my health, my (lack of) finances, my time with my child, for whom I have no support here at all. They also revealed they had not completed the assigned tasks we’d both agreed to do (I’d completed all of mine) such as applying for other funding, needed translation of materials and networking.

For me, quitting wasn’t an option. This is a topic I and other POC face everyday. Anti-racism isn’t a past-time. Stereotyping and its harmful effects aren’t either. Cultural appropriation, white supremacy and white privilege definitely aren’t. There was also the responsibility to the people who had volunteered to share their stories and experiences, hours and hours of time. Everyone makes their choices, but because of the white supremacist power structures in place, the subsequent white privilege and the mindsets and behaviors created, those choices and behaviors can and do have wider effect, and for POC…a more damaging impact.

Another way having to do the documentary alone made it even longer for me? After not been able afford or have time for a vacation in seven years, to see my family in the US, I STILL have not and it’s unlikely I’ll be able to because I cannot afford it. My time and money, all the rest of my savings, went into finishing the film (over 12,000€) in the end. During this time, I had lost 11 relatives and close friends since we’ve been here in Germany. That’s been devastating, besides which in 2016, I almost lost my mother, father and only sister. All in one year! That’s hard anyway, but especially when you’re helpless 10,000 miles away. In 2017, my son spent almost 9 months in the hospital or under doctor’s care, while I also have chronic health issues following a stroke in 2012.

This film is important to me. It is important to all those who voluntarily chose to participate, to share their hearts and experiences, to try to make the world a better place by taking the chance to share their pain. I cannot list all the times when I saw or became aware of their courage being minimized in a completely unacceptable way during early production, which is why I decided to continue without that negativity. These people deserved more. I was raised not to quit. That’s just not an option, which is again a privilege to be able to just shrug and walk away.  I was taught and learned you do nothing for yourself. That what you do is for others. In helping others, you help yourself. We are collective.

When you get a whole production dropped in your hands because there’s not enough upfront money for them (in an indie docu no less!), that everything of your life is forced on hold, must be restructured or ignored? That’s the story of this film. Subplots will include antagonizing participants, even if unintentional, wanting to make all decisions in their favor and/or wanting everything scheduled around their life, vacations and relationships. I don’t care if you’re enthusiastic or whatever, respect for the participants comes first then that of co-workers. Knowing how to interact and talk to people from other cultures and perspectives without forcing your own opinion is critically necessary. I’d talked about that during a lecture June 2017 at Humboldt University, and you can hear the podcast (link) here.

So, despite it’s beginning and some early interviews, Forget Winnetou! was solely directed and produced by me. Even though I and anyone watching it can see some of the technical flaws, I like the film and love the music by Johnny Clyde, one of the indigenous participants. I am proud of the product, particularly as I used Adobe Premiere Pro and it had incessant issues. I nearly had a professional breakdown in October 2017 after an auto-loaded update made all the edits and cuts I’d done up to that point unusable. I had to start the whole film over from scratch, months of work. This was a particular blow after being invited to meet with a manager from Berlinale NATIVe in July 2017, in order to hopefully get my film into the 2018 line-up, but being unable to deliver a product by deadline. Rage and frustration was on a whole other level, believe me, and being given 6 free months of the film editing app as compensation for the problem by an Adobe rep could not in any way make up for the loss of exposure my film would have gained by being screened at Berlinale.

The water is not quite all flowed under the bridge, but I try to keep positive as I feel the film’s importance no matter if it ever receives wider play or recognition. It was a triumph for me to finish it, at one of the hardest times of my life, and as challenges continue.

Thank you to all those who supported its production, directly or indirectly. The interns from Berlin Postkolonial who helped with checking subtitles, and most especially to Therese Degen who was instrumental in helping me get a screening copy ready for a roughcut feedback session at the Delphi Theater Weissensee, February 2018. Johnny Clyde and Viveka Frost, (both participants and videographers) stepped in and really encouraged me because I want a better world for them and their daughter, for people like them and all children.