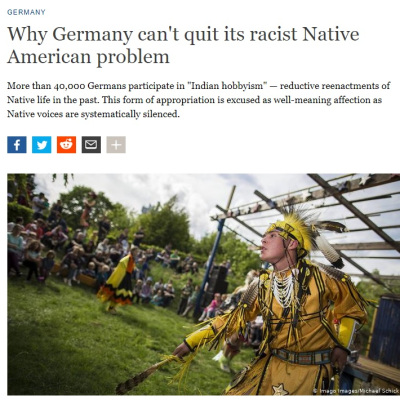 And despite claiming to be open-minded and non-racist, it is no surprise to us that except for one film festival solely dedicated to “immigrant” and refugee issues, not one German film festival, distributor or TV/Media source or outlet accepted or showed interest in our film, “Forget Winnetou! Loving in the Wrong Way”. Yet many others around the world have done so, and we are pleased to have won the awards and received the screenings we did.

Overall, Germany refuses to face it’s deep and normalized racism. Check the comments sections anywhere this article is posted, and you’ll see Germans (even those claiming to be open-minded and non-racist) vehemently defending racism and racist practice.

Here’s an excerpt, please read the full article at Deutsche Welle: “Across the country, Germans spent the past week celebrating Carnival, known for its parades, drinking, and colorful costumes ahead of the Lenten fast. There is a pervasive attitude that for these five days, Germans can shed their rigid cultural norms and adopt an “anything goes” policy.

Every year, pictures of some of the more racist trappings of Carnival, such as the use of blackface or “Chinese” costumes complete with conical hat, tend to face backlash both from mainstream culture and the country’s growing Asian and Afro-German communities.

However, the same cannot be said of the abundance of “Native American” costumes, a wildly popular choice in a country that has had a robust infatuation with Native stereotypes since the 1800s, made more popular by the works of beloved writer Karl May and his Winnetou character, the archetypal ‘noble savage, ‘and the 20th-century films depicting the character….”