I work everyday in some way with BIPOC and persons of European heritage who are working to make the world a better place for all peoples, albeit they may be doing so in quite different ways. It’s a multi-faceted problem our world is facing, so of course, multi-faceted and many-vectored ways are needed to create positive change. I cannot help but think of the many Europeans I know, who for years, have been working with and for Indigenous peoples who have been demeaned and derided by German and western society because they did not have university degrees. More often it was because they also choose to speak up on the past and current use of Native cultures, histories and traditions, in addition to whatever other work they’re doing. That they choose to be introspective and critical about themselves and their society AND ALSO work to create change in themselves and their societies (which inevitably has and must include some relinquishing of power and place) should be admired. Instead, they are often unsupported by their peers, and not infrequently harassed and ridiculed.

I was tagged in a post on Twitter sharing an article on “radical friendships” between Natives and Europeans, even equating it to being “blood brothers”. (btw this is a fictitious concept created by Europeans that misrepresents, homogenizes and generalizes Native relationships). Of course, that venue limits your characters and some inflections etc can be lost. These days I don’t often respond to posts like that. I’ve been spinning my wheels on that set, and prefer to direct what energy and time I have to helping those who are actually trying to decolonize and improve educational systems, instead of playing to sentimentalism and false equivalents. I don’t personally know the author of that article, nor do I have an negative feeling towards them. They are merely another representative of what is deeply problematic on the liberal, “open-minded” end of academia. And they’re getting paid to do so, primarily sharing white narratives and (mis)interpretations, and failing to critically important Indigenous perspectives, nuances and facts …while BIPOC like myself are often expected to provide our knowledge gratis. Or we’re invited for a single presentation in a learning module, while white teachers march on with Eurocentric curricula. And of course, there’s always the Natives who cozen this kind of position and behavior, failing to discern the deep, deep issues here they never make themselves aware of or they dismiss citing an idealistic “big picture”. There a lot of Natives who’ve gotten big money for years doing just that.

Anyway, here’s the entirety of what I wrote as a response to that article. I’ve seen far too many like it, and publishers keep giving them the platform, while rejecting those that challenge the “critical reflection” they claim to advocate. Unspoken, that critical reflection means only their reflecting on (and usually forgiving) themselves, with a “feel good” statement at this end, just like in this article. No practical ways structural change should take place…. even though it should and must. No acknowledge of the far more expansive and foundational issues of racism and neo-colonialism.

I’m out, check my other current projects. 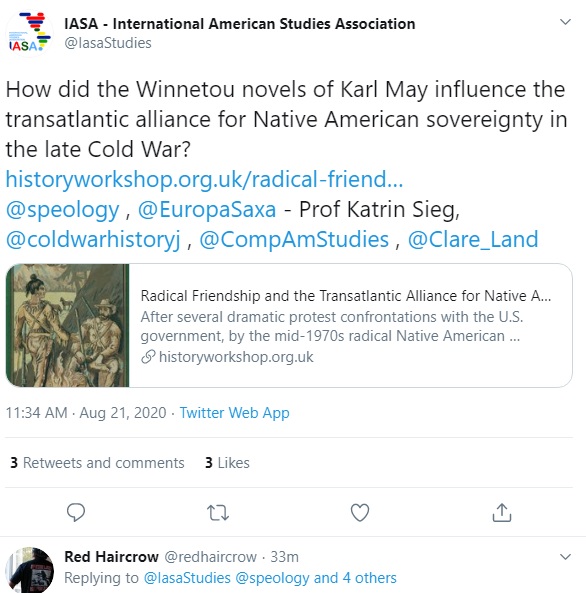 1. While having some pertinent points, this article is deeply problematic because they ALWAYS leave out the terms racism, white privilege and supremacist ideology, or even their descriptions, when it is inherently present. Power dynamics. Plus the author’s choice of words show the persistent practice of false equivalents. “Both sides of the alliance had to work hard to move beyond stereotypes… Working to meet each other’s expectations and adjust their own”.

2. This erases centuries of rampant misuse, misrepresentation and appropriation. It ignores or fails to include this is Racism. It encourages the usage of the same structures and practices silencing actual BIPOC. It plays up that certain connections represent the positives of what Euros can do (and Natives need to accept), but which cannot cancel out the enormous harm still being done to Indigenous peoples by European erasure in academia (and elsewhere). https://www.apa.org/pi/oema/resources/indian-mascots

3. Even though at times it admits things like European fetishism of Natives, apologism and romanticism, naivete persists throughout. They also seem to forget that several AIM leaders referenced are considered controversial, divisive and were abusive in Native communities. Their angle continues the history of the European adopted practice of dismissing critical flaws in leaders to keep the status quo. That is diametrically opposed to traditional leadership in many Indigenous cultures.

4. A comparative few notable names are used to conflate the idea of all Native inclusivity, that they should be open to these “radical” friendships with well-meaning white folks who call themselves experts, many of whom are profiting off the interest in Natives and teaching stereotypes. Just like my article in CBC POV, Europeans not seeking bylines and speaker tours truly working with Natives on sovereignty, anti-racism etc. never get “screen time”. http://www.cbc.ca/cbcdocspov/blog/native-hobbyism-is-modern-day-colonialism

5. Europeans who don’t (or stopped) the fantasies, choosing to work with Natives on NATIVE terms, recognizing the imbalance of power dynamics and the continued harm to and misrepresentation of Native histories, cultures and traditions are rarely mentioned. Instead, even flawed information is accepted because its coming from someone with a degree. (aka, “blood brothers”, a totally white creation that is not a Native practice). Yet still these are the ones hired to teach the next generations when actual Native professors and teachers (or others who rightfully challenge Eurocentrism) are available. It matters.

6. Tóth added a quote, “Real movement work can only happen if it is underpinned by careful critical reflection as well as meaningful action”, but if it is only Euros critiquing Euros (non-Euro get ignored)? This article is the result. The reality of “American studies” anywhere is whitewashed, just like academia as a whole. It’s not inclusive. Articles and books by Natives (esp if critical) aren’t getting published in favor of white perspectives. What work there is by Natives isn’t being credibly translated, in favor of the same. There is a failure or refusal to see power and place needs to be relinquished. Articles like this can continue to obscure these facts in favor of “feel good moments”.

7. That scholars keep circling back to May’s work is also problematic. It shows a lack of forward or critical thinking in key areas. If you’re really for Indigenous sovereignty why aren’t you talking about many movers and shakers today, who are fighting everyday, in all facets of life for that aim (no pun intended). Why circling back to a white narrative, a problematic racist one at that? He was influential & still is used for all kinds of agendas, just as Hitler did. https://www.dw.com/en/why-germany-cant-quit-its-racist-native-american-problem/a-52546068

8. Its partly why “Forget Winnetou! Loving in the Wrong Way” was titled thusly. Its no May bashing, but no German film festival screened it, despite it being an official selection for festivals and events around the world, many of whom were focused on human rights and social justice. No surprise there! It just proves my point. They cannot handle even perceived criticism, so German audiences are missing out on important info from Native perspective they claim to want, but mainstream academia and media still turn to those of European heritage for interpretation. Its time to move on with people, Natives and non-Natives alike, who are progressing, working to end racism & Eurocentrism, to make this world a better place for all. https://forgetwinnetou.com/2019/05/04/vielen-dank-osnabruck-museumquartier-on-april-26th-screening-and-qa/

9. Exactly why and how I’ll be teaching a seminar in September in Berlin on critical Indigenous perspectives, sharing accurate, un-rose-colored glasses information and data. There’s still too much Europeanized nonsense. It matters. https://situationsansatz.de/event/mensch-werden-und-lehren-kritische-perspektiven-von-native-americans-fuer-kita-schule-und-gesellschaft/

10. Its why I’ll be participating in an event in Hamburg for educators. Academia is still largely made up of this same demographic dealing in half truths and Euro interpretations of a situation(s) and history where they are clearly out of date and touch, if they ever really knew what going on in Indian Country. https://markk-hamburg.de/veranstaltungen/playing-indian/

11. Anyway, why are friendships between different peoples being called “radical”, without pointing out the widespread misuse of this term? Radical, radicalism are trigger words in western society today, associated with terrorism, anti-gov, anti-police, the “ruling” class term to condemn as dangerous.-PHILIP OCHIENG

12a. The end statement was “Radical friendships can provide courage and support, and help build a better world at a time when we need all the friends we can get.” To me this is a polite summation of the threats, insults and derogatory words I’ve had hurled in my face since I was a kid, “You should be thankful for anything you get, since you have it so bad”… even if it is something inherently abusive to you. It’s the ones saying, “Oh ignore all that (the stuff still deeply wrong) because we mean well!”

12b. You cannot build a better world when you are still supporting, benefiting from and hyping the structural racism, narratives and misinformation that has gotten this world to the state it is in. Speaking plainly, its the rise of apathy, normalized racism, claims of “reverse racism” and white supremacist ideology, direct and subtle (i.e. any ancient structures in non-European lands must have been built by aliens kinda thing.) Some are even still trying to do decolonization on white terms and telling us we should hop on board.

P.S. Oh & btw one of the Natives in my documentary, a friend of mine, was Means & Banks driver sometimes when they were here in Berlin. They visited his relatives & he has many stories. Funny how they never talk to people like that, but look to white folks who associated with them instead. That you didn’t know the Natives here (still here!) is symbolic of the entire issue. https://vimeo.com/268076405